Showing posts from February, 2019
Show all

Pope Francis’ kiss with the Grand Imam of al-Azhar Sheikh Ahmed al-Tayab, Its lesson to humanity and all religion I by Stephen W. Boniface 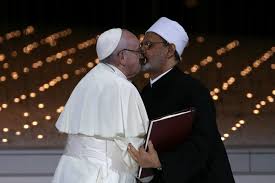 It is Pope Francis's seventh visit to a predominantly Muslim country, signaling a continuation of improving ties between the Vatican and the Islamic world. The Pope has sought to build bridges with the Muslim world by refusing to equate Islam with violence, arguing that all religions have fundamentalist elements and religious leaders must work together to combat all forms of fundamentalism and violence .                                 Pope Francis 1 and the Grand Imam The Pope and Grand Imam kissed. Kissing is a cross-cultural foundation of relationships and has been throughout the ages. It’s a fundamental expression of desire, intimacy, adoration and passion for one’s partner, mother, father, friend, wife, etc. Y es, to the green minded person, it may be an erotic sign. To the gay community, it may be that they are gays. To the protestant, it may be that the Catholic Church and Islam has something in common. But whichever way one interprets it, it teaches a very i
Post a Comment
Read more
More posts