Showing posts from May, 2019
Show all

8 BELIEFS THAT COULD RESTRICT YOUR SUCCESS IN LIFE. 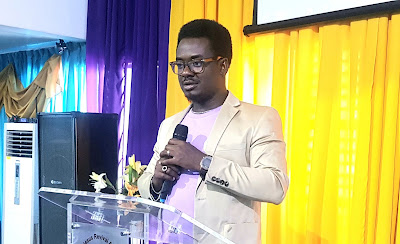 Stephen Wise Boniface Stephen Wise, a Life Coach and the author of YOU TOO CAN BE HAPPY on May 5 2019, gave a free general life coaching session; which centered on the topic: UNDERSTANDING THE POWER AND POTENTIAL LIMITS OF SOME BELIEF. During his speech, he may the audience to know that the world's population is about 7.5 billion people, and each person has her/his own belief(Philosophy). He said that, every belief has a foundation, if the foundation of your belief is corrupt, definitely your belief is corrupt and can never lead you to success in life. quoting the merriam webster.com ,  BELIEF is -an acceptance that a statement is true or that something exists. "his belief in the value of hard work" -trust, faith, or confidence in someone or something. "a belief in democratic politics“ Definition of belief - an acceptance that something exists or is true, especially one without proof, trust, faith, or confidence in (someone or something Sociologica
Post a Comment
Read more
More posts